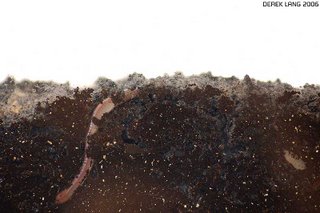 A worm making it's way up to the surface

Since my worm fascination which started a few days ago I've been doing a lot of reading. There are a lot of web sites that talk about worms. There are even sites that sell food for worms allowing the worm to live longer and alter their color to make them more appetizing as fish food. To save you some of the trouble I've documented some of the more interesting facts below...

Out of the various sites I have found the Worm Digest one of the better reads.
Posted by BagelHot at 4:30 PM

As an added point of trivia there have been cases of worms found in glaciers known as ice worms.

The only worm I'm interested in is the one found at the bottom of the tequila bottle.

I thought this post was going to be about Dune, but when I found out it was on earthworms I immediately lost interest.

Mmmm earthworms!! My favourite thing about them is how they come out to mate when its all sticky muddy, get wrapped up together and cover themselves in a layer of snot and mate for hours and hours while the snot dries all crispy around them! he heh