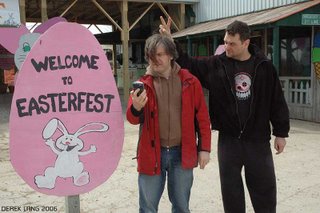 Darryl Gold and Andrew Majtenyi somewhere near or in Caledon

"A place to stand,
A place to grow,
We call this land...
Ontario.

A place to stand, a place to grow, Ontari-ari-ari-oh."

If you grew up in Ontario during the 70s, or maybe even in the northern part of New York State, I'm sure you would have heard this little ditty. It played on television sponsoring tourism in Ontario.

As a kid growing up in Ontario my parents took me hiking quite a bit. I'm not sure if they were into nature themselves or maybe it was to introduce me to the while "roughing it" experience just in case they wanted to abandon me later on in life. They would know that I'd be okay, for a few days at least, being able to build a fire using some twigs and some birch bark and making a shelter by digging a hole.

The experience would also make you appreciate the smaller things in life, like working washrooms, toilet paper, a warm dry bed, a roof over your head, a stove to cook your food, and power outlets for your tech. Yes, we're very fortunate individuals.

Our trips were to go off to some area near Hamilton and hike along the Bruce Trail armed with a stick and a few "Eatmore" chocolate bars. Although I don't really remember much of the hiking specifically, I do remember the eatmore chocolate bars melting in my pocket becoming a goo-like substance (with peanuts). I also remember seeing a garter snake half ruptured from eating a frog that was too big. Aside from that and some random memories of walking and pitching a tent in the rain then walking around the next day in soggy shoes, that's about it.

With the exception of the trips with the parents, a canoe trip, and the odd trips with friends I really haven't gotten out to do any hiking around Ontario for a while. That is until today...

Today, I joined Andrew Majtenyi and Darryl Gold on a small excursion outside the city limits for a hike somewhere around Caledon, the same area where a guy with gasoline can went into some Ontario Provincial Police office just a few hours earlier burning three officers. Our first stop was a farmer type store to have some pumpkin donuts! We pulled into the general store, got out of the car, and found they had not opened yet. There were people doing some cleaning or store stuff but no service.

We walked around the place for about five minutes or so taking in the pre-Easter decorations. The place reminded me of the cheesy western Star Trek set in "Spectre of the Gun". It was a large deserted space with an empty hot dog stand labeled "Hot dogs by Chef Pierre" and the odd pink easter egg sign suck at various intervals. 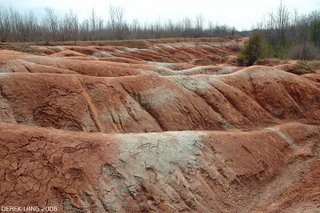 Our next stop was the Cheltenham Badlands. A reddish rock or dirt formation with a layer of greenish shale sandwiched in between, the badlands are part of the Niagara Escarpment. This would be another great place for a Star Trek type shoot as you really don't see this sort of formation much (at least near Toronto). 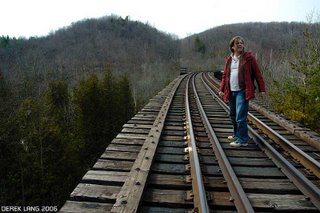 "Does anyone hear a train?"

From the badlands we drove for a few more minutes and parked the car off to the side of the road in what seemed to be the middle of nowhere. A winding road going off in two directions, a river, and a bunch of trees. Andrew knew where we were but for all Darryl and I knew we could have been anywhere. We walked up a steep incline to get to some train tracks. In one direction there was the bridge that seemed to be about 10 stories down (notice the tree line in the picture). In the other direction the tracks led us toward our next mini hike.

The five minute walk along the tracks took us to a steep incline through a forest. Our destination was a make shift stair way, way at the top of the hill. Along the way we passed some small cave like openings that spewed out cool air. The ground around the openings had patches of ice all over. It was all very green. There was moss covering all the rocks (see picture below). 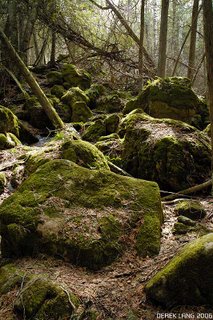 As I'm not in peak physical shape, and don't I have been since school days, my boots seemed to be made of lead once we reached about halfway to the stairs. In the back of my mind I wondered how much more work would have to go into carrying heavier more expensive lenses, how much those lenses would cost, and long it would take for me to acquire them. The idea of a camera assistant flitted through my mind to be replaced by a pack mule, to be replaced by a pack goat. This was a sharp incline after all. Is there such a thing as a goat that can carry stuff up a hill? 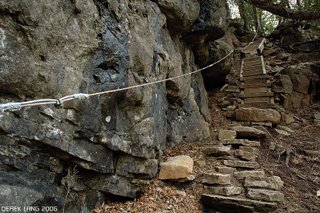 Eventually we made it to the stairs or what could be called stairs. More like a rope with things to step on. The final climb although really steep wasn't too bad. Being able to pull yourself up with the rope made it easier on the legs. We took a few minutes to take a breather, adjust some camera gear, and look out over valley through the trees. Once done we headed back down toward the car and our next hike. 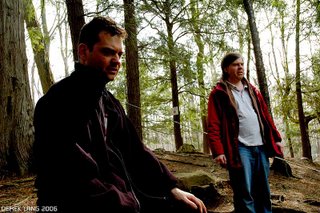 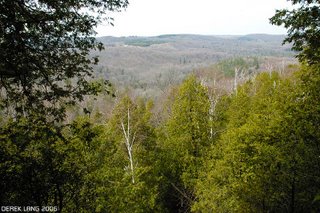 Once at the car we stopped to drink some water then proceeded to walk through the tiny town of Brimstone to the next trail. There wasn't much wildlife other than the odd crawling caterpillar and some insects. The hilight being two flies making out on Darryl's coat. There were a few birds a fat squirrel. That was about all there was to see as far as animals go. 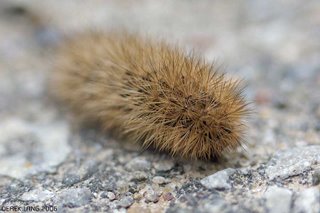 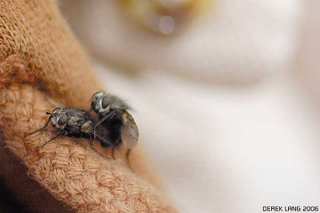 Two flies making out on Darryl 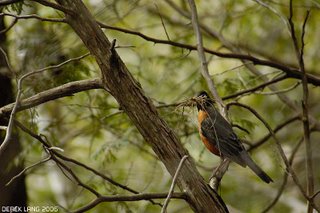 The ground became sandy and unlike the icy forest hill that we climbed earlier, the forest we walked through on this trek was nicely paved by a winding road. The forest opened up onto some grassy rolling hills. Walking on the grass felt like walking on a bunch of heads. The ground felt like round hard lumps. The grass would slide odd the lumps like a bad wig. It was a weird sensation. 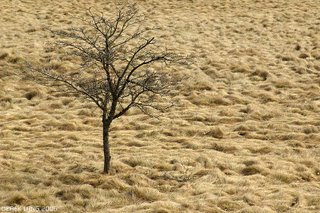 Our goal was to get to the end of the "Forks of the Credit" path where there was a water fall (part of the credit river gorge), rest, and head back. We got to the waterfall, we rested, but we ended up doing some more hiking toward a small metal bridge. 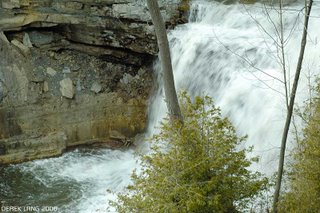 To see the falls in 3D click here to the ME3D blog.

Andrew had told us that the small steel bridge was a great place to massage your aching feet. It was lumpy and it had holes to let your feet breathe. It sounded kind of wonky but my feet were a bit tired. So off to the bridge we went. It was only a short distance away. 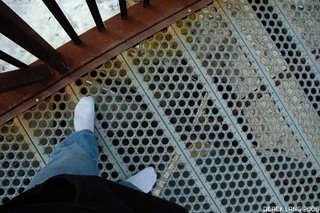 Taking off the shoes to walk along the bridge felt odd, actually painful would be a good word. But my feet felt a lot better once I put my boots back on. Darryl ended up running down the hill on the other side of the bridge to the river bank. 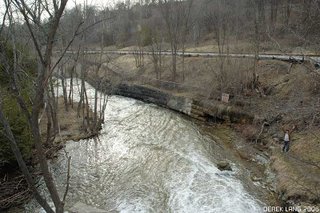 Darryl down on the riverbank

I'm not really sure why as he started telling us earlier about how his knee was getting sore from all the climbing uphill. Still it made for a decent shot with someone in it for scale. Once Darryl made his way back up we headed back to the car. It only took us 40 minutes, about a third the time it took for us to get to the falls. Once in the car we headed off to Mississauga to a cheap all you can eat buffet.

For only $8.99 + tax you could eat as much as you wanted. Whatever weight I may have lost on the hike I most likely gained at the restaurant and then some. I stuffed myself with two heaping plates of chicken balls, fried egg rolls, shrimp, noodles, rice, pork somethings, seaweed salad (that tasted like licking a rubber tire) bad cold sushi, two glasses of water and a can of Coke. If that wasn't enough I forced myself to eat some Jello and some strawberry ice cream just cause it looked good. It may not have been the greatest food but I was starving and it was after all an all you could eat buffet.

Once back in Toronto I took the streetcar home trying not to fall asleep from all the food I consumed. It felt like the chicken balls were expanding thanks to the gas in the can of Coke. By the time I made it home I felt extremely bloated and tired. The end to another great day and another fun story of sightseeing in Ontario. 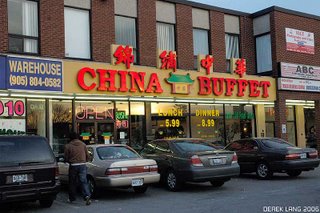 The final destination
Posted by BagelHot at 1:30 PM

That was a very long entry. Some nice photos in that bunch.

I remember that Ontario song painfully well... sung mercilessly by a group of children.

That was an amazing post. I have spent a considerable amount of time combing the area around Brimstone looking for the old sandstone mines that are supposedly there. I bet those cave openings are what I was looking for. I eventually found a similar type of abandoned mine near Niagra Falls. I have a few pictures on the archives of my site "Rockwatching" Check it out. www.greencanuck.net/rockhound Cheers, Mick