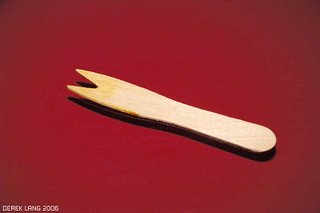 A take away fork

Today's adventure took me to Bluepoint. Located at 291 King street west, Bluepoint is the new oyster bar restaurant on the block. It's located in a highly competitive area that caters to the live theatre crowd. Although we didn't get to try many of the dishes, the dishes we did try, a few assorted oyster dishes, were very fresh. There was one meat dish that came with the take away fork (pictured above). The food writer thought it was a little odd to have such a fancy place with nice dishes serve food with a wooden piece of cutlery meant for take away fish and chips.

After the food sampling we were off to the Motorcycle club (formally the Indian Motorcycle club) to see a panty party. If you think there's a lot of good looking women running around half naked while guys run around with panties on their heads think again. This was a charity function. You, the donator, would donate underwear and buy raffle tickets for charity. There were some great prizes including 100 free downloadable tunes from iTunes.

The night didn't end there as the Juicy Stuff crew and I made our way to LUX at King and Bathurst. There was a birthday going on with a bunch of models from the Moxie modelling agency. Why there was a modelling agency involved? I didn't get a chance to stick around long enough to ask why.

As a side note, I ran into the girl that I took a picture of from the Playboy fashion launch (the girl on the runway with all the viewers looking on) and managed to show her the image I captured using the Epson P-2000. Small world.
Posted by BagelHot at 7:00 PM