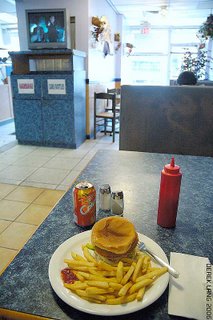 Lunch at the local JP restaurant

The last few days I've pretty much been confined to the apartment working to get stuff done for tomorrow. I've had a lot of time to dwell thoughts that would be dismissed on normal days. Thanks to my only outing today being for lunch here's the thought for the day...

For some unexplained reason there are a few shows that I've only seen one episode of. What's so odd about that you ask? Let me try to explain. Take Stargate SG-1. I've never really wanted to watch the show as I didn't really like the movie. A few years ago, while in England, 4am, sitting in a hotel room with nothing better to do I turned on the tele. Stargate was on. It was actually pretty funny as it was a spoof on itself. In the show they were making a show called Blackhole X-treme. This was the first episode I watched. It was the only episode I watched.

Fast forward to today. I went over to the local JP restaurant. I don't know what JP stands for but they have good chicken burgers. Crunchy, crispy, particle packed, chicken burgers that are probably bad for you but taste good none the less. Anyhoo...on the television there was Stargate SG-1. After a few seconds of watching I realized it was the same episode as seen in England. What are the odds of that? There's got to be at least nine seasons of that show.

Another show which is more statistically astounding is Northern Exposure. Again I've only seen one episode, in this case, the pilot. I've seen it five times. I have not seen any other episodes. It's not like I go into the TV guide to see if the pilot is on just to watch it or pop in a DVD. Weird.

There are other odd TV watching experiences. Take seeing my first episode of the Fugitive for example. It just so happened that it was in color and it's the episode where Richard Kimble catches the one armed man. D'oh!

Seeing "Hush" as the first Buffy the Vampire episode and thinking the whole series was that well written. Later I'd find "Hush" was one of the better shows of the series. Don't get me wrong I'm a huge Joss Whedon fan. The Buffy series is great but one of the favorite shows, at least for me, is "Hush".

You can now go back to your normal way of thinking.
Posted by BagelHot at 1:30 PM

You could try watching the same TV show once a week. That might cut down on your "seen only one episode" epidemic.