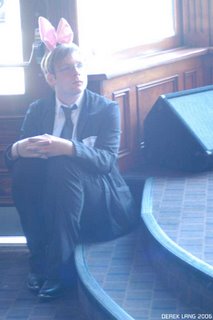 On the theme of rabbits...

Today or this evening rather was spent running around the city. First there was the InsideOut launch, the gay and lesbian film festival, at the Gladstone. Then run off to shoot the opening of Contact. Only I got the dates mixed up it's actually tomorrow. Still, I got to see some of the photos already hanging on the walls. Then to Cache to talk to Mike, one of the PR guys, about photos I took last week. 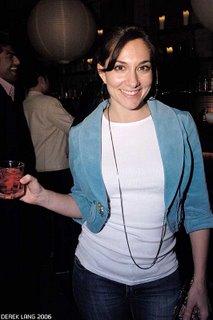 "Jen" at Cache from the "Bold and the Beautiful".

Does anyone out there watch this daytime soap. I forgot the last name of "Jen". If someone could leave a comment I'll update the info. Also if anyone knows the bunny guy at the door of the InsideOut I'll put his name up as well. With all the running around I really did a bad job at remembering people's names.

To be honest the act of doing my taxes has been in the back of my mind lately, causing me to not think clearly on any particular thing I'm doing. If the blog entries seem sluggish over the next few days it's because of the tax work I'll be doing.
Posted by BagelHot at 6:00 PM