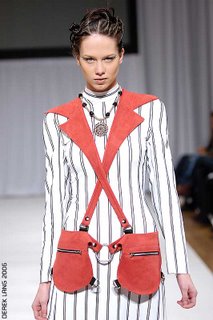 First on the runway

It's been almost a week since fashion week ran it's course through the city of Toronto. Almost like an echo Andrew Majtenyi's fashion show featuring his 2006 fall winter collection followed up the fashion week. I was more impressed with Majtenyi's show than the fashion week shows at the Liberty Grand. Perhaps it's because I have a film background, or maybe I like entertainment. Majtenyi's show not only had some pretty amazing clothing (details on this later) but had some showmanship to boot.

I've heard that the showmanship, the video presentation, the stuntman on the ribbons, would be shunned here in North America by the media, where as in Europe it's taken for granted as would blend right in. True or not, to a certain extent I can believe it. The Liberty Grand with all it's sponsership didn't have any embellishments when it came to the runway shows. Models in, model out. Zip, zip, zoom.

In terms of budget I could see that adding extra interesting things would lengthen the nights if not the entire week. Instead of starting at 5pm and ending at 11pm, days would have to be longer for everyone or there would have to be less shows shown. 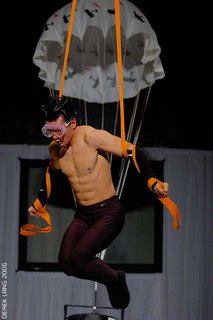 I started today by renting a 70-200mm 2.8 Nikkor lens. It was only $40 + tax for the evening and weekend. I have to return it on monday morning. The actual price of the lens after tax, should someone out there want to get me something for christmas, is $2500. Just a few hundred dollars more than the Nikon D200 body.

I got to the Design Exchange at 2pm, about 6 hours before the actual show. There were a bunch of people keeping themselves busy by placing a white carpet-like substance down the runway, stuffing goodie bags (300 of them!), placing labels on seats, adjusting video gear and creating seat sections.

Somewhere upstairs in a small board room, small for having thirty odd people or more, the models were starting to arrive. As we, the photographers, weren't really allowed to go in while the whole changing thing took place, we were allowed in to shoot the behind the scenes, getting their make-up and hair done. It was like walking into a hive of busy bees. 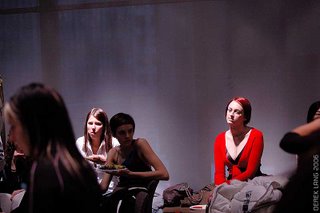 Upon closer inspection I noticed that some of them were veterans from Majtenyi's show last year and some were models from fashion week. I suppose like any industry you start getting familiar with the various faces that work within it. Even the photographers had that fashion week familarity about them. Later on when introducing myself I found out a lot of them were on the media platform with me that entire week. One photographer, Raymond, was standing behind me for two days. He recognized the back of my head I guess.

The runway room was packed. There were 300 seats and the number of people in the room counted in at 1051. Despite having the large group the show was pretty well organized. Unlike the craziness of fashion week, people at the Design Exchange looked like they were finding their seats. No dive bombing seats at this venue (read Max Macdonald's fashion week day one report on the Mackage show at JuicyStuff.ca).

After the show a mob of people went across the street to Ri, a downtown bar, to drink, socialize and eat. It was packed by the time I wrapped my gear and made my way over there. I couldn't tell which people were there from the fashion show and which people were regulars. On top of that I was exhausted.

We left at around 1:30am, for some reason the bar closed at midnight (what's with that?), and headed over to Swatow. Yea for food! By the time I got home it was around 4am. I booted up the computer to start going through the files converting them from RAW to jpeg and went to sleep.
Posted by BagelHot at 8:15 PM