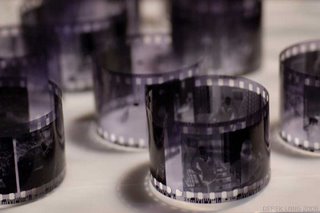 35 mm film strips waiting to be put into my film binder.

The main goal of the day was to visit the photo lab to retrieve the film I had dropped off there on saturday. Ilford 100 ASA, black and white film. I noticed a long scratch across the entire length of the film and wondered if it was from my camera, the developers, or was the film bought like that?

The film was shot using my stereo Realist camera. The pictures are five perferations (sprocket holes) wide as opposed to the standard eight. When the camera goes off two images are recorded, one for your left eye, one for your right. There are many ways to view the resulting images in 3D. The method I use is to scan the two image and convert them into a single anagylphic image. You've probably seen stuff like this before. It's like a black and with image with green and red fringing.

For more examples have a look on my other, and mostly neglected blog, me3D.
Posted by BagelHot at 4:00 PM