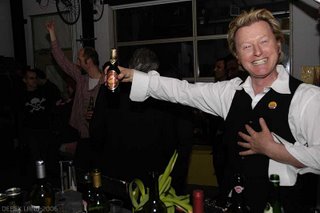 "How do you know Bill Wrigley anyway?" That's the question that people kept asking me all night. My answer was that I had just met him a few nights ago at another networking party hosted by G.A.T. (Girl about Town). Very personable, Bill invited myself and Emmanuel to his party because the day ends in a "Y". Actually I think the motivation was that he didn't want the party to be filled with just women.

No, we can't have that. So Emmanuel and I decided to go the the party to meet those poor lonely women lurking about all by themselves. We're nice that way.

The party took place at Bill's studio. I can't really remember the actual location in Toronto as we were driven up there by van. Not that we were hog tied and blindfolded. I suppose I just never really paid attention to where the van was going. It was near some train tracks if that helps with the visualization.

The ceiling had a bunch of wagons that resembled the great lakes. It was Bill's current art project. On the walls he had some drawings of the same wagons and a painting he did of a orange haired, elf-like, girl with big eyes. What impressed me with his work was that the lines in his drawings were all crisp and clean. There was a nice weight to the lines that varied depending on where it was in the image. It was almost like looking at comicbook art drawn by John Buscema (as opposed to the spidery thin lines, but ultra detailed work of Todd MacFarlane or Jim Lee). 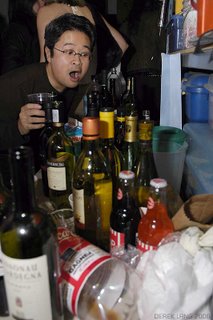 Emmanuel reacting to all the bottles of booze

For those of you who don't know these artists. They're comic book artists (and one of them is a guy that makes toy figurines). Not that I'm trying to comic book geek out all the readers or anything. I just used to read a lot of comics and the artists that seem to come up quite a bit back then were these guys.

The party had a very diverse group of people. Some were artists, some were public relations, some hair stylists, some dancers (if they weren't they should have been). Overall I met a lot of interesting people. No I didn't pick up any women. Sorry to get your hopes up.

See me and Wendy in Stereo by clicking here.
Posted by BagelHot at 10:30 PM