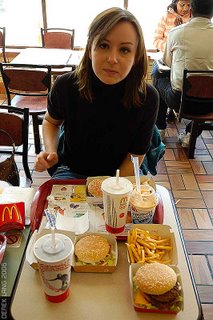 Why is it that something that tastes so great is so bad for you usually? For lunch today I met up with Leanna. We both had a craving for McDonalds. There's something about eating a Big Mac. The melted cheese, the chopped up little onions, the precisely mashed burger meat, the shredded lettuce, I'm not really sure what it is about the burger that I crave every now and then.

Anyone who saw "Supersize me" might equate eating at McDonalds with the memories you had as a kid. I was one of those kids. I still have those little McDonalds figures that were made out of plastic that you put on the end of your spoon or on the tip of your pencil. I also still have the six boxes that came out for the Star Trek movie. The Happy Meals came with some weird toy and a random iron on. You too could show that you were a geek by ironing on your favorite department insigina and or character to your t-shirt.

It was way back when I was in grade three that the first McDonalds opened in our neighborhood. It was part of the newly placed Gerrard Square. McDonalds was huge. So much so that we even had a school trip to go visit the local restaurant and see how things worked behind the scenes.

Kind of like a magical ride to Disneyland, McDonalds showed us, via a small, yet informative, film how fries were thrown out after a certain time, how ordinary human beings could transform themselves into super McDonalds employees by going to Burger University, and how great it would be to work with a clown as a mascot. McDonalds was the happiest burger place around and a high tech marvel for the time. Machines that actually beeped when food was done. What would they think of next?

Since then McDonalds has been the source of bad stories ranging from cutting down rain forests, not using enough recycled material (they used to have foam containers), selling coffee that was way too hot, not being very healthy and the term McJob (a term meaning that the job goes nowhere). There's been a lot of McDonalds battering over the years with the "Supersize Me" documentary being one of the most recent.

Then there's the disappearance of the McRib sandwich (sort of like the failing of the Burger King Burger Buddies). The thing about the McRib sandwich was that between the bun there was a meat like thing that was in the shape of a small bunch of ribs but with no bones!

Now that I think about it I missed the March 17th shamrock shake this year. Do they even sell the green milk byproduct any more?

As a side note, according to Darryl, the Grimace used to have six arms. He then had his number of arms reduced to two so as not to scare any kids. I personally do not remember the scary version.
Posted by BagelHot at 12:30 PM

Bringing back old memories I seem to recall a resturant chain from my childhood that had restaurants in the shape of a Barn. The chain was called the Red Barn. They used to have great burgers.

"Kentucky Fried Chicken,
in your neighbourhood,
Col. Sanders and his boys,
Make it finger lickin' good."

As a child, my family never ate at fast food places. They were too expensive for the crap they served. (We didn't eat out anywhere except for my cousins birthdays at the Willow Restaurant, occasional truck stop dining when camping, and the local Dairy Queen was our rare big fancy treat.) I have no whimsical memories of food. And I despised MacDonald's - we called it "soggy cardboard and worms" referring to the thin, moist bun and textureless, flavourless burger. I had the misfortune to eat at a MacDonald's recently while traveling with cheap friends who had coupons, and the food was just as crappy as I remember.

I did not know restaurants well until I met you, Bagelhot! And I do thank you, and Toronto is the best place to have a dining out education. Also, in part thanks to you, my favourite fast food place is Subway. (I guess for burgers, I'd have to say I like Harvey's, because of all the extra dill pickles. Chris introduced me to Harvey's.)

I can't believe that you put THAT picture of me up there! you could have put on one that was a little more flattering. I love ya still
What is it about McDonalds that put such a smile on my face? I think it was because I hardly ate it as a child.
anyway just in case you wanted to know I love chocolate milk shacks with fries...mmmmm
see you when you get back from London