The Subway to Grandmas 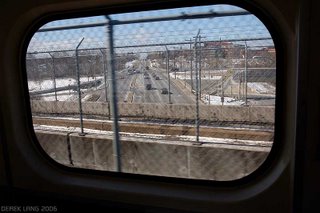 Out the subway window

As a kid I remember wanting to look out the windows of the subway to see stuff whiz by. Maybe as a kid everything seems interesting, then as a weary adult things aren't that interesting. You seen it all or at least seem to have seen it all. What's the point of looking out the window? Have you ever noticed people walking around the city don't look up much unless they're new to the city?

As the Toronto subway is mostly underground there's not really a lot to see. Lights, tunnel and more tunnel. In the odd trek across town there might be the occasion where my youthful TTC subway adventures would take the subway (and me) outside. Years later, on the way to visit my grandmother, I notice I'm more busy just trying to stay awake I so don't miss my stop. The stuff going on outside the train usually goes by unnoticed. Today I made a point to look out. Yep not much has changed. 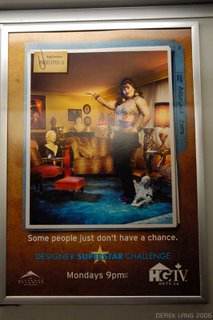 In my boredom I did notice an Ad on the side of the subway car (see above). It's cheesy and normally I would have put it out of my mind but then I saw something and I thought "Are there any others that have noticed this?", followed by "Geez, I really AM a geek.".

If you draw your attention to the top left hand corner you'll see a post-it with a file number referring to the image of the women in her living room. You may have to double click on the image to enlarge it. Notice the serial number on the post-it is the same as the call sign for the Enterprise (of Star Trek The Next Generation). Oh yeah... I've got a lot of time on my hands.
Posted by BagelHot at 9:30 AM

I generally find public trasport icky, but looking out the subway window, I an unendingly awed by this crazy, amazing world we've created. When I stop being awed, I'm dead.