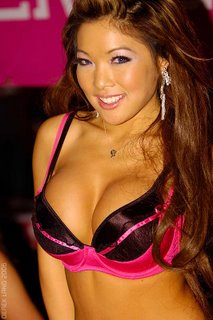 Today's outing was to go to the Sport Compact Night (or SCN) show to meet up with Simon to get my 8x10 prints from him at the Playboy booth no less. There's the fun of seeing the pimped out cars, new car parts and of course the eye candy of the female persuasion.

As a bit of history this was the first year that this particular car show had made it's way to Toronto. Unlike the Performance World car show or the Speedorama show the SCN was only in town for a single day. The show overall seemed smaller in terms of the numbers of customized cars. Even the automotive displays showing off the new car tech seemed smaller in numbers. Perhaps to make up for it the show, just being there in the south underground convention centre, seemed louder, darker and filled with more car or beer model-type women. 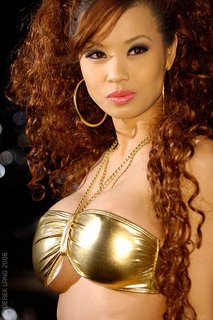 The show had actually shipped some models in from the west cost. The largest import car model being Francine Dee, or so I was told. An enhanced girl to bring in the young rice boyz crowd perhaps. From LA, Alberta, even from the east, Quebec. 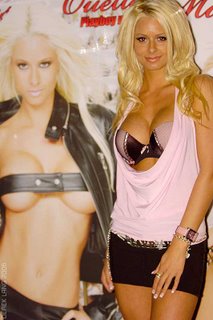 Maryse Oullet poses in front of her playboy cover display

Sure being a model at these shows probably pays pretty good coin. It's takes quite a bit of stamina. Would you want to stand around or in front of a bunch of dorky guys (and gals) have them hold you or stand next to you while their friend takes your picture? All this happening with music pumped out so loud from various sources that you can't hear anything anyone is saying without being right next to them yelling at the top of your lungs. 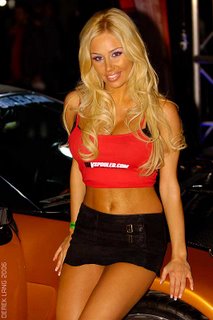 Ashley, a year after our photo shoot.

That said I bumped into my favorite model, and friend, Ashley. Although I could only hear about half of what she said I found out she was getting exhausted and still had four more hours to go. I bumped into her while looking for Simon and the alleged Playboy booth. I never did find the Playboy booth he mentioned. I found other model booths and displays.

Eventually I found a nice quiet spot where I could work the cell phone and call him. I found out he had been there and had already left to go see the movie "V for Vendetta". Since I already paid my whopping $17 to get in and there was no way of getting back in without repaying, I opted to stay for the Bikini contest.

As with any function, be it a band, a political party gathering, a fashion show, any type of stage show for that matter, it's always good to get there early so you get a good vantage point. I made my way to the stage, which was being used by some rappers, about an hour before the actual contest. I was flanked by some loud short girls, yelling and shooting the odd picture with their cell phones and or pocket sized cameras.

The contest didn't start on time. Instead of 8:00pm, the show started at 9:30pm. The camera bag, monopod, and BFL (big f**kin lens) started to take it's toll on my spinal cord. That and the fact that I was cramped into a tiny space thanks to the loud girls and some guy behind me with a Canon rebel. At about 9:20pm some "kid", maybe in his late teens, started plowing through the crowd behind me and tried squeezing through the girls. He pushing and shoving pissed me off. If he would have asked to squeeze in front I probably would have let him but as he was being a dumbass pushy person, almost knocking one of the girls to the ground and literally stepping on another one all while knocking into my rented lens, I blocked him with my arm and told him that he wasn't going near to the stage and if he kept shoving I'd grab him by the neck and drag his ass to the back of the crowd.

Where do these kids come from? Is there no etiquette among photographers let alone people anymore? The contest went without incident. By the time I got home I was happy to dump the gear on the floor and go to sleep.
Posted by BagelHot at 3:31 PM

Dear Bagelhot,
What is up with the large volume of tits & ass on your blog? Are you lonely or are you just a perv? I'm assuming that people close to know you well enough to know this but others who do not have this distinct pleasure might be perceiving you as not quite someone they would trust with their sister.

If this blog doesn't fulfil your conservative standards please feel free to not read anymore but thanks for your input and dropping by.

Personally I think Anonymous is making some pretty extreme assumptions.

I think your blog site is pretty tame and to make a judgement call on you being a prev just because you have some half naked women on your blog shows just how insecure Anonymous is with the female body.

It's not like Bagelhot is writing from a prison cell. If he is he's doing a great job at getting pictures from the outside world. If we are to judge his character shouldn't we be taking his raffle idea into consideration. Or are you, Anonymous, just seeking out the T&A on the blog and skipping everything else? That might say something about you.

Anonymous, you sound like an over protective control freak to me. If you were dating my sister she'd probably kick your ass.

Anonymous' statements are interesting in that Anonymous is using other people's perception to question Bagelhot's character.

Anonymous could have just come out and said "BagelHot is a prev". Makes me think that Anonymous is a passive agressive personality.

Speaking of character, How does Bagelhot eat the toxic waste and still live to blog about it?

As a sister of someone - and someone who did date Bagelhot!!! I can testify that he's a Very-Nice-Guy, and not too, too much of a perv...(or at least, not much way back then...) And how can he be lonely surrounded by all those models? (But of course, they won't date him because he's too "nice" - he's got to be way more of a perv than he is to be attractive to them.) Send him your sisters, people! (Especially if your sisters are cute photo-geeks...) He deserves a nice girl. Hey, maybe someone who can cook him healthy meals! (Maybe Theotherbear might add, someone who can, er, model for him?)

And dear Bagelhot,
you're right - a little low on the "A" quotient, and as Cupcake previouly pointed out, the male quotient, too.