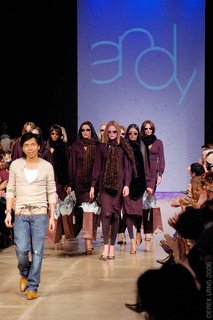 Andy The-Ahn followed by the models of his show.

One of today's favorite designers was Andy. He had designed the interior of a FORD car (the official car of fashion week I might add) and as such had a large Ford presence throughout the show.

Who says music doesn't play a role in fashion? One of the memorable things about Andy's show, other than the clothing, was the use of Prince music. It's good to have high energy music that people know. Let's Go Crazy, Cream and Sheila E's Glamourous Life added life to the runway. Some of the photographers started moving the the music making it a bit difficult to use slow shutter speeds. The platform we were standing on flexed a little too much for my taste.
Posted by BagelHot at 8:00 PM