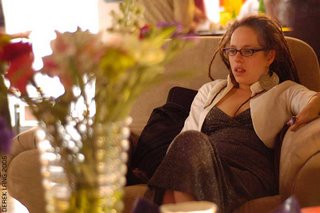 2:39am - Abby contemplates getting a taxi home.

I've been working on some compositing work over the last few days. Haven't really seen much other than my bed, my computer, and maybe some other parts of the apartment. Tonight after getting up at 9:30am and working all day I decided at 9:00pm to let the computer do a few renders and escape out to a party.

Graham a friend of Abby is getting married next week. Instead of a standard bachelor party loaded with a night of poker and girls jumping out of cakes (could happen) his friends they threw him a party with the band and his band friends. The party resembled a jam session with alcohol and Thai food.

When I arrived the band was playing and singing reggae music. A nice groove that was easy to talk over. Good party music. As the night wore on the music became more experimental. I'm not sure I liked the feedback noises or even if those noises were on purpose but for the most part the small crowd seemed to have a good time.

Eventually, at around 3:40am, I managed to leave and take the bloor bus home. Landsdowne and Bloor is not a great place to be at 4:00am. There was a group of loud individuals at the nearby donut shop. I noticed an older man in the shadows at the bank waiting for the bus. He just off of work and was taking the vomit comet home. He started talking to me about the problems with kids these days and eventually the conversation turned into how America is going to take over the world by force because it's unemployment rate within the country was on the rise. Why? Because it's farming out the jobs to other countries to cut down on expensive production or management costs. The result? The States worrying about other countries (the same countries) being a threat because they have too much power.

All this political banter was a lot to take in so early in the morning. The old man had a point even if my brain could barely make out each street we drove by. The bus was packed. At 4:30 in the morning it had standing room only! I got home at 5:30am exhausted. Checked the computer. It was still working away. Fell asleep right away.
Posted by BagelHot at 9:00 PM