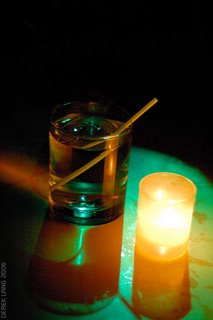 All I could shoot without getting my camera taken away.

Happy St. Patrick's Day! That said I'd also like to point out that it's day five of fashion week. There are no runway shows today at the Liberty Grand so it's a great day to sleep. The last four days have taken a lot of energy, shooting and sifting through pictures, then uploading them (with a freaking modem!). It's not that bad. During the uploads I've been able to cook a meal, usually a pork chop cause it's fast. Pork chops the official food for Derek's fashion week.

Tonight there was a big party featuring Ru Paul to go to in the evening. To prepare I slept through most of the day with cat naps, maybe getting up to answer the phone every now and then, print some DVD labels, and eat. I don't think the segmented sleeping works very well as I was still tired by the time I met Juliet, the producer, near the ultra resturant/club.

To answer dragonfly's question about Ru Paul.... She didn't show up on stage until about 1am, or maybe it was around 1:30am, I kind of lost track. The show was fun although it felt pretty short like 20 minutes. The security, a bunch of large, wide, men with pocket flashlights beamed light into the audience to see if anyone was taking pictures. If someone was caught with a camera they were ejected from the club.

I did see a bunch of cellphones being used to take pictures. I guess security couldn't be bothered with the low tech imaging gear. It was about 3:30am or so when I found myself in front of the second hot dog stand going home. The first one, located pretty close to the resturant cooked me up an italian sausage. The second vender located closer to university sold me a polish sausage. I got home and fell asleep immediately
Posted by BagelHot at 10:00 PM