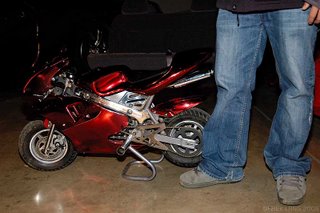 A tiny Motorcycle that really works

Like most car shows I've seen in Toronto there's a whole bunch of cars, some souped up (or "tricked out" I believe the term is nowadays) more than others and there's the "bikini" or women wearing something quite hot part of the show. Whoever equated girls and cars is a genius. On the car side the show was not too bad. There were a lot of cars to look at. Not so many customized cars from the 70s like last years SuperVan. In fact now that I think about it there really weren't any. Mostly 70s muscle cars and the odd nicely polished 50s vehicles. 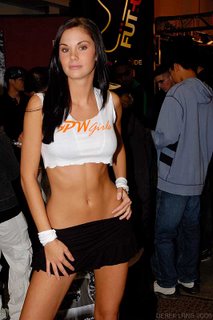 As for the girls in skimpy clothing? It was pretty lame. A competition that lasted under fifteen minutes with no real winner or maybe it was supposed to be a clothing fashion show for the Hustler clothing line? If it was it was way better than the Playboy fashion show last November. It actually started on time.

Overall the show was a pretty big disappointing event. Possibly because it was located all the way out near the airport. Yes that might be a contributing factor in this reporters poor review.
Posted by BagelHot at 8:00 PM

Hey, are you ever going to do that computer calendar idea you had? Now that you're a picture-taker, you're in a good position to get it done...