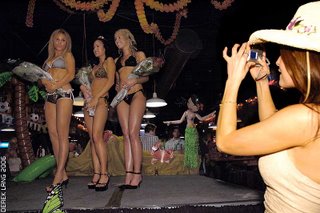 Laura from Niagara Falls, Marie from Toronto, Amanda from Brampton get their photo taken.

For anyone that has to travel from downtown Toronto to Brampton using the GO transit on a regular basis this entry is dedicated to you. As a non-GO trainer getting into Union station and figuring out how the ticketing system, the zones and what track to get onto is a bit of work.

I managed to get on the right train but wasn't sure if I was getting off at the right stop. As there are two stops for Brampton I got off the train looked around, wasn't sure and jumped back on the train. It was only after the doors closed that I realized that was the stop to get off at. D'oh!

Six minutes later I arrived at the next stop (Mount Pleasant) at 18:03. Luckily I picked up a schedule and noticed a train was going back in the other direction at 18:08. I got off the train and proceeded to the other side of the tracks. Only there were no other tracks! I looked at the schedule again and realized that it was a bus going back! Running over to the bus area I arrived just in time to see the bus pulling out way across the the lot. Crap!

Squinting down at the schedule I found the next bus to leave the station would be at 21:08. Three hours! There were other buses in the area labeled with the Brampton transit logos. I approached a bus driver and asked for directions. He pointed out that I had just missed the GO bus then told me how to get back using the local transit. To get back to the Brampton GO station I would have to use two buses. I took these buses back. It took an hour. An hour!

From the station it was another 20 minute walk to the local Hooters and the Bikini contest. I managed to walk in just as it was starting.
Posted by BagelHot at 7:00 PM

Hm. the things you'll do to see some bikinis...