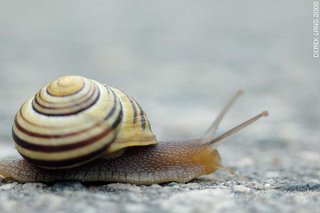 Snails crawling along from a worm's eye view.

This morning I had to go to Cherry Beach Sound, a building with sound rooms and audio editing bays, to drop off some animation on a hard drive. My final delivery for the project I was working on. After about three hours sleep I woke up at 6am to do some last minute revisions and make my way to the soud studio by 9am.

Leaving early, around 7:30, I decided to walk down to the studio from the closest queen streetcar stop. It was about a twenty minute walk south from there. Passing a bike trail I noticed a hoard of snails squirming along. Where were they coming from, where were they going? No idea. But since I just read an article on how to eat snails I decided to take some time out and shoot them. 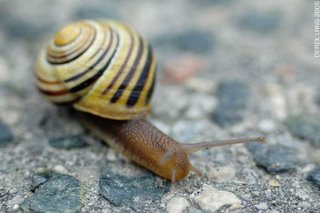 It's interesting to note that being at the end of the project this was a good sign to slow down (to a snail's pace) and enjoy shooting again.
Posted by BagelHot at 8:45 AM