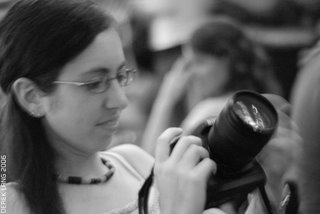 I was invited to a birthday party for someone I never met and there I found a secret meeting of Flickr users. What is a Flickr user you ask? It's another web site that specifically allows people to upload and share pictures. 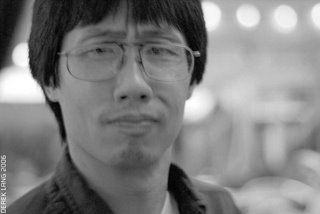 My cousin Dave - the odd man out.

Everyone at the table had a camera of some kind. Nikon D50, D70s, D200, Canon Rebel, Sony. Everyone that is except my cousin Dave. It was kind of strange seeing a camera crossfire. Cameras pointing from each person shooting some other person across the table. 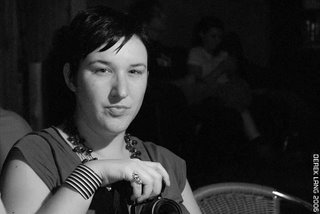 I managed to get another user to hold my sb-800 (flash) and tried out the D200 in commander mode. The camera uses a bunch of preflashes to control the remote flash. The result being a subject (in this case Stephanie) with nice modeling (lighting) instead of flat on flash with no defining shadows.
Posted by BagelHot at 6:30 PM

the Odd Man Out