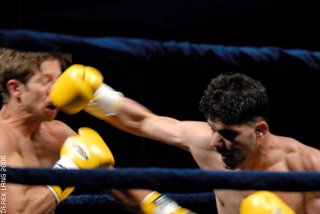 Boxing at the Docks

The fight night at the docks was a great place to practice taking action shots with my new camera body. Yes, I broke down and picked up another camera body. I couldn't go two to four weeks, the time Nikon estimated for repair, without my D70. The new body is slightly different and takes a bit of getting used to.

The idea of going on a shoot without intimate knowledge of the cameras functions scares me so I picked up the camera body a few days before and went to the first thing that presented itself to me. In this case it was a boxing match, er... matches. An event that will be a regular occurance at the Docks so we were told.

Shooting boxing matches is pretty difficult unless you're right up against the ring side. Even when you're there (not that I was) the ref tends to block your shot as he's trying to get out of the way of the two fighters.

The new camera body supports shooting in black and white so I took some pictures a la "Raging Bull". My vantage point was above the ring for most of the matches. The shot above was taken while downstairs getting food. It's not as clear as I would have liked but it's not bad considering I was using my 70-200mm lens with a 2x teleconvertor and weaving between a crowd of people between me and the boxing ring.
Posted by BagelHot at 7:00 PM